(No. 68) It turns out that older people may have the richest emotional lives, by Stephen P. Williams

Feeling good in the dying light

Outside my window the setting sun drops blocks of tomato light on the sides of buildings in lower Manhattan. It’s 4:39 and the days are short, but not as short as they were last week. I feel optimistic about the future, despite the difficult situations most of us face right now.

I’ve been reading a lot about emotions and aging, and I’ve found there’s not a lot of research into the emotional lives of older people. Toddlers and teens and midlife crisis enactors get a lot of attention, but people over 50 or so don’t get the same treatment. Instead, we’re seen as at the end stage of emotional development. Just as our bodies are declining in some ways, so must our emotions decline. We’re rigid. We don’t change. We feel the past more than the present or future.

Not true, of course.

A professor at Stanford named Laura Carstensen, was one of the first researchers to take a serious look at aging emotions. I’m fascinated by her paper, Emotional Experience in Everyday Life Across the Adult Life Span, published at the turn of the 21st century.

Carstensen and colleagues examined the intensity and frequency of everyday emotional experience in 184 people between the ages of 18 and 94 years old. While older people are often stereotyped as being uptight and cranky, Carstensen’s data showed that positive emotions weren’t tied to a person’s age.

In the study, negative emotional experiences declined in frequency as people aged, until about age 60, when the decline leveled off. The older a person was, the more distinctive their various emotions were. Sadness did not blend so much into happiness, for instance, as might happen with a 17 year old. And older people felt positive emotions for longer periods of time than they felt negative emotions.

I find these results uplifting, and not totally surprising -- the oldsters I know are genuinely deeply feeling people who also have figured out how to manage what they are feeling. Let’s keep it up.

Aging and the city

Climate change will be an issue

He’s very thoughtful for a guy obsessed with living into the 22nd century.

Trees already know how to get old gracefully

If we’re going to live to be 150 (which you and I definitely aren’t), we’ll want to see some beautiful old trees. Why not start right now by trying to keep the old trees happy.

And if you are a tree-hugger, as I literally am, you might appreciate the Dutch concept of wind bathing.

A note on the newsletter

I’d like to share some news about Age: The Next Everything. In the coming weeks, I’m changing the name and tweaking the design to better reflect my desire that we can experience this act of aging as a community. I hope to offer more of your stories to the mix, and also introduce some new features and editions. I’ll keep you updated.

On a side note, besides being a writer, I am involved in blockchain, NFTs and cryptocurrency. I know that these subjects can be off-putting, for a variety of reasons. But when I discovered the technology, in 2017, I became fascinated by the potential for decentralized systems (government, financial, artistic), and just got hooked. In 2019, my book Blockchain: The Next Everything, was published by Scribner, and I’ve traveled the world speaking about the potentials and pitfalls of the technology.

Right now I’m working with a partner to develop a series of creative offerings, ranging from a free communal game called Coingame, to generative music NFTs called Evertunes. Coingame begins tomorrow, with the distribution of free coins that will either increase in number as you trade them, or decrease, randomly.  If you are interested in playing, check out the Evertunes Studio website, and give us your email address or, if you have one, your public ethereum wallet address (such as Metamask). We’ll send you some free coins and you can start playing!

Speaking of NFT’s. Here’s one I created from a photograph I took of a very talkative crow in California. 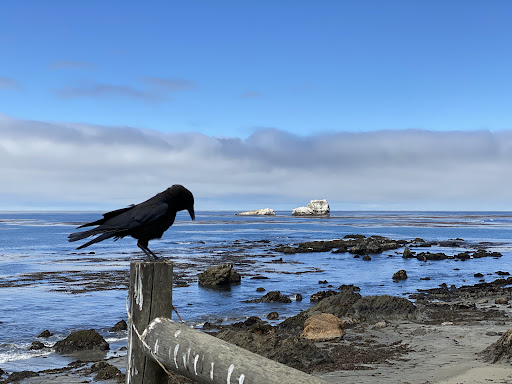